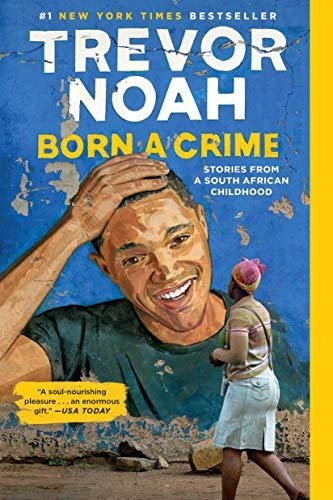 Born a Crime: Stories from a South African Childhood

It can’t be surprising that Born a Crime: Stories from a South African Childhood by the iconic South African comedian, Trevor Noah should be the #1 New York Times Bestseller. A lame explanation would be to attribute the book’s success to the comedian’s fame. But in this memoir that documents the early years of Trevor’s life, readers encounter the man they meet on stage, with his unyielding and biting sense of humor. Only this time, it is about the circumstances and the broken world in which he was born and raised, with the political setting deeply marked by racial tensions.

It is a coming-of-age memoir of a child whose birth was considered taboo. At the age where the color-line dominated social life in South Africa, Trevor happened, the fruit of love between a Swiss father and a black Xhosa mother. He is an abomination, defying the existing social and political norms.

The novel begins with the unbelievable scene where the author describes how his mother threw him out of a moving car: “I was nine years old when my mother threw me out of a moving car.” It is dramatic. It is tragic and painful. And the reason for such an act is pretty obvious. Trevor takes readers on experiences of his childhood and on what it felt like to grow in a world that was sick and that never tolerated him because of the immorality Act of 1927: “Any European male who has illicit carnal intercourse with a native female, and any native male who has illicit carnal intercourse with a European female… shall be guilty of an offense liable on conviction to imprisonment for a period not exceeding four years.” Being born of the mixed races already put Trevor in a very delicate and dangerous spot: he can’t be seen moving freely.

In this memoir, the author explores his struggles growing up and the discipline imposed on him by his mother, measures that, seemingly ridiculous, were designed to keep them both from harm’s way. Born a Crime: Stories from a South African Childhood tells Trevor’s story, but it also explores the theme of apartheid in South Africa and the many implications it had on the black folk. The reader quickly understands that: “The white man was quite stern with the native,” especially when enforcing the rules of their religion. In language that is deceptively simple and in a tone that is laced with humor, Trevor makes a powerful indictment against apartheid and offers readers powerful glimpses of a world ridden with racial segregation. You will smile, and cry, and feel a lot of pain as you read this story.