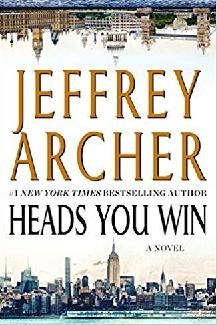 Heads You Win: A Novel

In the usual Jeffrey Archer signature, Heads You Win: A Novel features compelling characters and a tale as sophisticated as the backdrop against which the action takes place. It is Leningrad, Russia in 1968 and a young and prodigious child, Alexander Karpenko, suffers a devastating blow when the KGB murders his father for defying the government. He and his mother flees Russia, but choosing between Great Britain and America is a choice that Alex makes with the toss of a coin. Thus begins an adventure that takes readers on a journey of fortune set in two continents and spanning a period of thirty years. Can Alexander find the courage to confront his past when the ineluctable moment arrives?

The narrative begins with an incisive and powerful exploration of the world of the young protagonist and the thrills and perils of school life. In an idle conversation, he remarks: “suspect our teachers enjoy watching us suffering, well aware it will be the last time they have power over us.” Heads You Win: A Novel is one of Archer’s novels in which he particularly explores the human condition. The despair that grips the protagonist and his mother as they leave Russia behind is captured in the instant he tosses a coin to make a life-changing choice. While this could seem offhand and trivial to some, it portrays a reckless sense of abandon born from despair. This is a tale of grit and adventure, filled with an endearing sense of humanity and pathos. The prose is stellar and it is enriched by the author’s skillfully crafted dialogues.

The unpredictability of the plot and the rich characters combine with the beautifully imagined setting to transport readers into a completely new and exciting world. A rare gem of entertainment and a literary ripsnorter with an irresistible pull. One of the rare books you can’t put down.