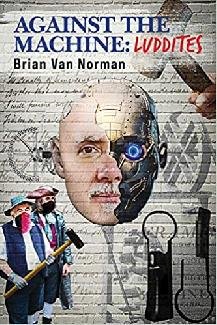 Against the Machine: Luddites

Against the Machine: Luddites by Brian Van Norman is one of the novels I have read twice before reviewing, because of the beauty of the prose, the wonderful depiction of the social setting with its nuanced realities, and the skillful handling of characters.

The story takes readers to a historical setting in northern Great Britain during the Napoleonic Wars. Readers are introduced to a group of have-nots whose livelihood is gradually taken away from them by the industrial revolution that has replaced the work of human hands with machines. The luddites won’t have any of that, so they set out to destroy the machines. It’s a new war, and how far will it take them?

The narrative features a magnetic protagonist, the twenty-two-year old George Mellor, whose father disappeared from Huddersfield many years ago, leaving the family penniless. George has had to make his own way, “taking ship as a cabin boy advancing to sailor for seven years, until he’d returned to find his mother, Mathilda, remarried to Wood.” He is a natural born leader who possesses experience beyond his years and an almost carnal charisma. This young man, together with his peers, Big Will Thorp, Thomas Smith, and Sam ignites a revolution that is about to disrupt society’s machinery. This novel narrates the story of the luddites and the havoc they cause to mill-masters who procure more machines to replace human labor. It is an attack on a system and on progress, for progress doesn’t advance everyone. Follow each character as they evolve through the chaotic atmosphere, and can the British troops stop the madness and the terror?

Brian Van Norman has just established himself as one of the great storytellers in the historical genre, crafting a novel that is rich in history and culture and that absorbs the reader right from the very first sentence: “It was snowing indoors.” His gift for character and plot sets this novel apart. The prose is flawless and filled with wonderful descriptions. There is an unalloyed quirkiness that entices the reader and while the characters are anti-revolutionary, they are so skillfully developed that it is hard to not share their sympathy, even in their worst moments. Against the Machine: Luddites is a spellbinding historical novel with unforgettable characters.