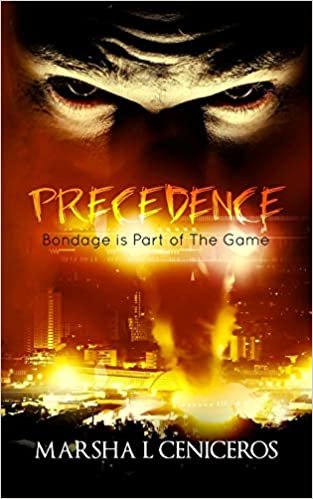 Precedence: Bondage is Part of The Game

Precedence: Bondage is Part of The Game by Marsha L Ceniceros is a psychological thriller with strong hints of fantasy and science fiction. When the Russian assassin, Bohdan decides it’s time for a change, he defects to the United States. But his past is not yet done with him as he suffers recurring nightmares. His condition doesn’t get any better with the discovery that his pregnant wife was the Mark of an Assassin. When his grandson disappears, he is lured into a dangerous game as he fights to uncover the truth. Guided by his instincts as an assassin, he follows a deadly path that leads to a worldwide cover-up and crime. Now an old man, can he thrive and find answers in a world ruled by advanced technology?

This novel is engrossing, psychologically disturbing and emotionally strong. The plot is strong, featuring a crisis point that literally absorbs the reader —homeless people disappearing, a family with a shady past, and an unscrupulous scientist pursuing experiments that put humanity in grave danger. The protagonist is a senior character and so genuinely flawed that he immediately arrests the interest of the reader. Marsha L Ceniceros’ gift for character is exemplified in her ability to plunge readers into the depths of the psyche of her characters. They are elaborately developed and each character evolves through the story in a way that forces readers to pay attention.

The writing in Precedence: Bondage is Part of The Game is fabulous, filled with strong imagery of locales in which the story takes place and focused scenes. It is proficient and eminently unpredictable, with a pacing that is fast, and action that is never lacking. Amid the manifold surprises and plot twists, the most surprising feature is how well the psychological depth of the protagonist is explored and the magnitude of what he faces.