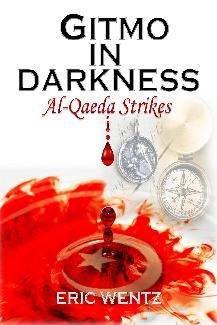 An entry guaranteed to please readers who look for good and stylistic writing and characters that are compelling and worth following, Eric Wentzâ€™ Gitmo in Darkness: Al Qaeda Strikes follows Lieutenant Commander Grant Chisolm on a death-defying mission as a liaison officer to Guantanamo. While this is a mission that provides him with the unique opportunity to avenge the death of his father, assassinated by the jihadists in 1980, it also plunges him into the den of vipers, navigating the treacherous world of the Taliban and Al-Qaeda. Can he fulfill his mission, get his revenge and pull out of the fray unscathed?

Eric Wentz is a great storyteller who invents a world that distills the reality that we live in and characters that remind readers of some of the defining moments that have been at the center of the conflict in religion and the threat of terrorism. This novel asks the question: Why do the jihadists do what they do? As the reader follows the powerful conflict, they encounter a character that experiences a powerful psychological conflict as he struggles to understand the nuances of the religious conflict.

There are memorable characters like Moustafa Arius Riat al-Haj, also known as detainee 9696 whose role in the narrative lifts the story and helps in the development of the conflict. The international setting is ingeniously done and it takes readers from the outback regions of Afghanistan and Pakistan to the Guantanamo prison in Cuba. Eric Wentz writes beautifully, employing literary techniques like suspense which enriches the reading experience and increases the readerâ€™s interest. Nothing is what it seems and the surprising twists are manifold. From the gorgeous writing to the sophisticated characters, Gitmo in Darkness: Al-Qaeda Strikes makes for a real page-turner.