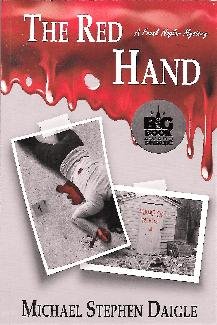 A serial killer on the loose, a city on edge, and a rookie, not your run-of-the-mill detective still learning the trade in the most ruthless of manners are elements that set The Red Hand by Michael Stephen Daigle apart, a fourth entry into the Frank Nagler Mysteries.

Ironton, N.J.is terrified by the bodies that pile up, counting nine bodies over several months. There is no clear M.O. for the murders and the diversity in the style of killing makes it even more difficult to determine if they are orchestrated by the same person. But there is so much more to that: the victims are people with different backgrounds — and Nagler has to establish the connection between them and solve the mystery. But how?

It is a far-from- a-burner kind of book to read, and the author creates a compelling character for a protagonist, a rookie detective with personal and family issues. His wife’s health is declining and in spite of all he has to worry about, his first case is a complicated one and he finds himself pithed against an unpredictable and savage murderer. The vulnerability of the protagonist and the inhumanity written into his personality attract the sympathy of the reader instantly. Michael Stephen Daigle is deft with the developmental arc, allowing readers to watch as the characters evolve through the conflict, learning to walk straighter from their initial, sluggish steps.

The Red Hand is the first novel I am reading from this author, and while it is part of a series, it reads perfectly as a standalone novel. The prose is crisp and delectable and the overall writing featuring descriptions that pull readers into a dark wave sweeping through a city. The chilling story is fast-paced, twisty, and with the potential to hold readers awake throughout the night.