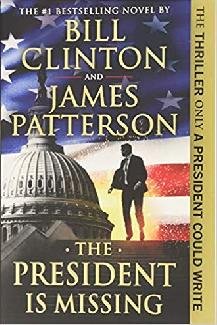 The President Is Missing: A Novel

The President Is Missing: A Novel by
JAMES PATTERSON
&
BILL CLINTON
is a monumental political thriller, expertly plotted and tautly written. It starts with dangerous rumors of cyber terrorism and espionage. The president knows about it and he knows it can cause widespread hysteria in the country. Can he handle it silently with his team of experts? When the president suddenly disappears, the fear rises at fever peak. But can the nation be prevented from plunging into the darkness that lurks everywhere, and how?

It is gripping; it is terrifying; it is written to give the chills, quicken the flow of blood in the reader’s vein, a pulsating story that is frighteningly real and entertaining. There is no doubt that such a narrative can only be written by someone who knows the workings of the White House so well, a former commander in chief. The dialogues reflect the reality of the American society, the conflict a reflection of what lurks beneath the seemingly easy fabric of the American culture, and the characters so humanly appealing.

The plot is cunningly done and the chapters written with endings that literally push the reader onto the next page. Here is a political thriller for readers who want something intense and exhilarating. James Patterson’s signature is unmistakable and the experience of former Commander-in-Chief reflects through each page of the narrative. A real page-turner!