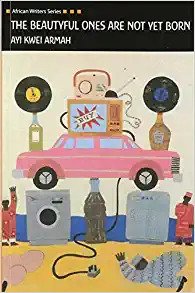 The Beautyful Ones Are Not Yet Born

In The Beautyful Ones Are Not Yet Born by Ayi Kwei Armah, a railway freight clerk in Ghana struggles against the seductive character of corruption in a post-colonial setting that reflects the misuse of power and rampant corruption. The protagonist, simply known as The Man, is a symbolic character who is pressured by his wife to imitate the lifestyle of Koomson, a corrupt politician who rides on expensive cars and has a life of luxury. Even Teacher, the philosopher to whom he runs for moral support, can't do much to help The Man.

When the masses rise up against the ruling class, Koomson, the once-powerful politician, seeks refuge in The Man’s house. He cowers, his breath, the stench “of rotten menstrual blood.” It is when Estella, The Man’s wife, sees the miserable state of the politician that she tells her husband: “I am happy you never became like him.” A novel that starts slowly, with a dilapidated bus and that gains momentum as the narrative moves forward is filled with symbolism, and the characters are also symbolic, each well-written to represent a cross-section of the population — the common laborers who have to work under very cruel and poor conditions, those who seem to be tired of the political reality like Teacher, and wives of politicians who enjoy the fruits of corruption.

The Beautyful Ones Are Not Yet Born is a story of post-colonial Ghana and what is very touching about the story is how the author depicts the reality in third world countries in the wake of independence. Ayi Kwei Armah’s prose is descriptive and he is very stylistic in the way he writes, allowing strong imagery, like the bus driver’s uncouth manners, the dirty buss, the banister that is greasy and a depository of the sweat of every kind of worker, become key elements that reveal that lack of civility and the moral decadence that permeates the society. It is filled with humor and pathos and the author’s unique way of looking at the political reality is powerful.